Some individuals are reportedly able to leap six or more feet into the air. Males are characteristically stockier and heavier boned than the more refined females.The head is large with strong jaws.

Agile and light on his feet, the chest is wide and moderately deep, giving the sense of athletic ability and power. The neck is muscular, tapering from the shoulders to the head and may have a slight dewlap.

The head is square, large and broad with muscular cheeks relatively in proportion to the size and overall structure of the dog.There is a defined furrow between the rounded eyes, with a distinct, sharply defined, deep stop.

The strong muzzle is broad and square. The preferred bite is reverse scissors, but a moderate underbite, scissors or even bite are acceptable. A variety of ear types are acceptable including cropped, rose, half-pricked and forward flap.

The nose is black, red, brown or grizzle; black is the preferred color according to the standard. In black-nosed dogs, the preferred lip color is black, though some pink is permitted.

The lips should be full but not too loose. The front legs are heavy-boned, strong and straight. The hindquarters should be very broad and thick with well-defined muscles.

The tail is low-set, begins thick at the base, and tapers to a point. The coat is smooth and short, and comes in all shades of brindle including red brindle, varying degrees of white, red, brown, tan, fawn and piebald.

Health Problems: A generally healthy breed but it's prone to hip dysplasia. 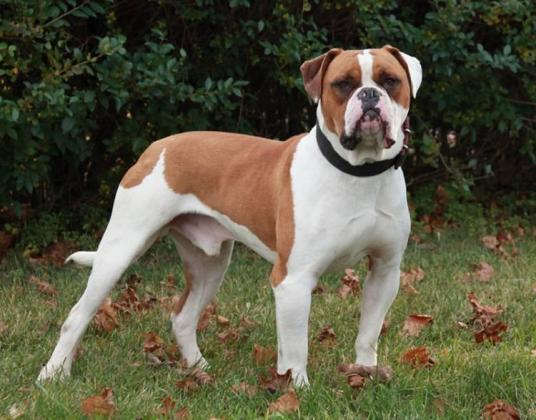 The very muscular, sturdy and powerful, yet compact frame of the American Bulldog remains higher on the leg, more agile and swifter than its English counterpart. Some individuals are reportedly able.