The ears are set on high at the side of the head, triangular and slightly rounded at the tip. The coat is of medium texture, straight to slightly wavy, weather resistant, of moderate length with an undercoat.

There is a moderate mane and frill, more pronounced in dogs than bitches. An identifying characteristic is his natural or docked bobtail. He should be attentive, lively and agile with a body slightly longer than its height at the withers.

The Aussie has a strong, deep chest and stands squarely on all fours. The front legs are straight. Front de wclaw removal is optional, but rear dewclaws are generally removed. The feet are compact and oval with arched toes.

The top of the head is approximately the same length as the slightly tapering muzzle. The head has a moderate stop. The teeth form a scissors bite. The medium-sized oval eyes come brown, blue, amber, or any variation or combination including flecks and marbling.

The ears are set on high at the side of the head, triangular and slightly rounded at the tip, of moderate size with length measured by bringing the tip of the ear around to the inside corner of the eye.

The medium length coat comes in blue merle, red (liver) merle, solid black, and solid red (liver) all with or without white markings and/or tan (copper) points with no order of preference.

The hair around the ears and eyes should not be white. The coat may be straight or slightly wavy, and should have feathering on the back of the legs, and a mane and frill around the neck.

Hair on the head, front of the forelegs and on the outside of the ears is shorter than the rest of the coat. The tail is generally docked if it is longer then 4 inches, though most are naturally short. Each individual's masculinity or femininity is clearly defined. 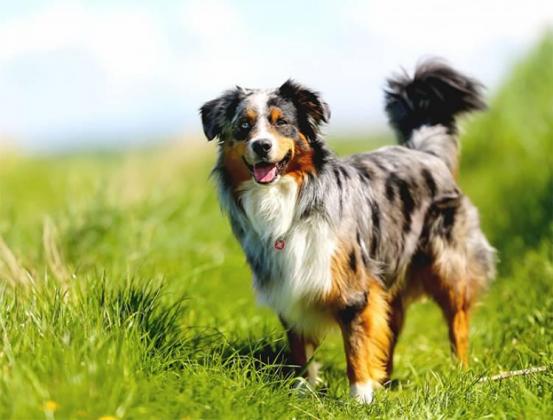 The Australian Shepherd is actually an American breed and in the USA the first official registry was in the 1950s. The Aussie, as it is known, is a medium-sized, robust, well-balanced, rustic dog. The ears are set on high.