1/2
Alphabetically: B
Breed: Bandog
Country: All
Region: All
City: All
Country of Origin: Middle England
Color: Any
Life Expectancy: 10-12 years
Litter Size: 5-10 puppies
Hypoallergenic: No
Ad ID: 366
The true origin of the 'Bandogge' or American Bandog Mastiff is unknown, although it is thought that the hybrid breed came into existence in Middle England, around 1250-1300.The forebears of the Bandog are believed to be the American Pit Bull Terrier and the Neapolitan Mastiff, however other contributing bloodlines may include the early Bullenbeissers and crossed breeds used in the Crusades.Strictly a working dog, the Bandog was primarily bred for the purposes of hunting, fighting and guarding property, usually chained throughout the day and released at night to protect the homestead.This intimidating breed boasts several distinctive characteristics, bearing in mind the modern Bandog has been developed from a variety of stock breeds, commonly including the English Mastiff, Neapolitan Mastiff, Pit Bull Terrier and American Staffordshire Terrier.Because of this, no unified breed standard exists for the Bandog, and appearance varies greatly. The characteristic traits often seen include a powerful and stocky build, a broad skull and muzzle, strong limbs and upright, triangular ears.Selectively bred for its strength, stamina, confidence and fearlessness, the Bandog of old is both imposing and independent-minded, requiring firm leadership and consistent obedience training from puppyhood.Not particularly suited to relaxed domestic life, the Bandog needs regular physical and mental enrichment in order to discourage boredom and destructive behaviours in the home.Compatible with other house pets only when introduced gradually or raised with them, the Bandog should be observed at all times, especially around children. On average, a healthy Bandog will weigh 35-65 kg depending on its classification and gender, with a life expectancy of 10 years.Due to the relative rarity of the Bandog and absence of any unified breed standard, its health is difficult to ascertain. Genetic or breed-specific diseases cannot be determined. 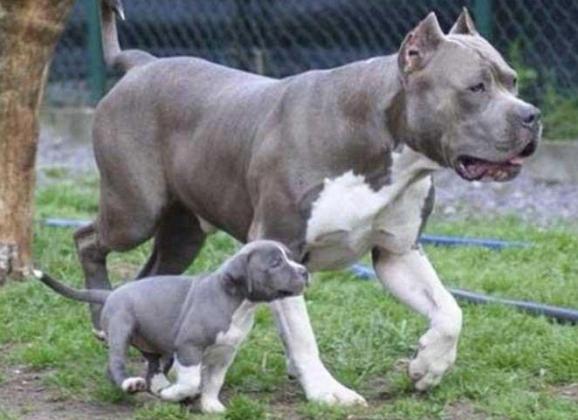 The true origin of the 'Bandogge' or American Bandog Mastiff is unknown, although it is thought that the hybrid breed came into existence in Middle England, around 1250-1300. The forebears of the Bandog.