Alphabetically: B
Breed: Belgian Laekenois
Country: All
Region: All
City: All
Country of Origin: Belgium
Color: Fawn Sable, Mahogany, Red, Fawn, Black & Tan, Red Sable
Life Expectancy: 13-15 years
Height: Male: 60-66 cm, Female: 56-62 cm
Weight: Male: 25-30 kg, Female: 20-25 kg
Litter Size: 5-11 puppies
Hypoallergenic: No
Ad ID: 390
The Laekenois original duty, in addition to guarding and tending the flock, was to guard linen drying in the fields. He was an enthusiast worker and a quick learner that made him a desirable choice for the task at hand.

He was later called on to serve as a messenger dog during World War I and II. At this time his numbers were severely decreased. The body is sturdy and well proportioned, with a squarely shaped appearance when viewed from the side.

The erect ears are triangular in shape, with the height equal to the width, and set high on the head.  The moderately pointed muzzle is parallel to the topline of the skull and tapers, but is not excessively pointy.

The muzzle and head are fringed, giving the dog a shaggy, woolly look. The medium sized, almond-shaped eyes are dark with rims that contrast with lighter colored hair. The hindquarters are muscular without looking heavy.

Dense hair is bushy on the tail, but there is no distinct feathering. The chest is deep, reaching to the elbow. The front legs are very straight, parallel and vertical to the ground. The round feet are cat-like in appearance.

Dewclaws are usually removed. The long tail is thick at the base and reaches at least to the hock. The nose is black and the lips should be tight. The teeth should meet in a scissors or level bite.

The Laekenois's medium length rough, wire coat covers the body in hair that can reach over two inches. Colors include a range from fawn to mahogany with a black overlay. 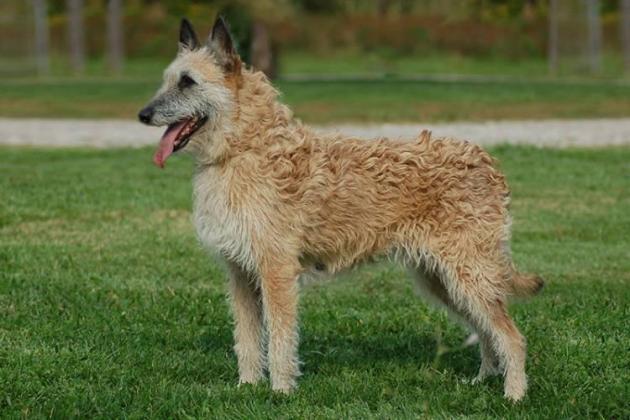 The Laekenois original duty, in addition to guarding and tending the flock, was to guard linen drying in the fields. He was an enthusiast worker and a quick learner that made him a desirable choice.