The main purchases of breeding material were made in the republics of Overcaucasus - Azerbaidzhan, Georgia, Armenia. From these dogs also started the racing breeding of Caucasian Ovcharkas in Soviet Union.

The Caucasian Ovtcharka has moderate deep-set, dark eyes. The ears are densely covered with hair for insulation. The hips are slightly raised from the line of the back.

The tail is profusely covered with a long feathering of heavy hair. The forelimbs are long, straight, and densely boned. The paws are large and heavy, with hair between the toes, providing excellent insulation and protection.

The nose is black and prominent with well opened, large nostrils. The thick, dense, weather-resistant coat has profuse feathering and is especially effective at keeping out the cold. Puppy coats are finer then adult coats. 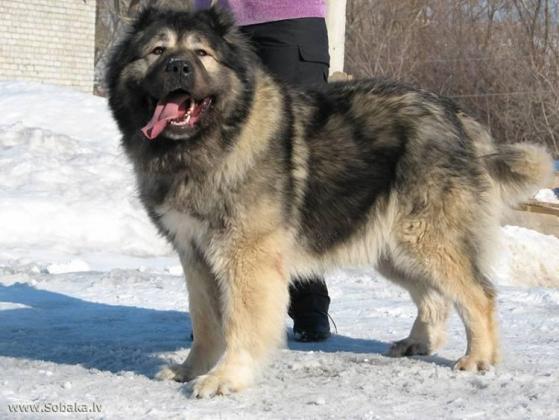 Half century ago, when after Great Patriotic War the dogs from the Caucasus began to be imported for needs of army and various authorities using Caucasian Ovcharkas to carry a guarding service. The main purchases of breeding material were made in the republics of Overcaucasus - Azerbaidzhan, Georgia, Armenia.