The two most distinctive features of the Chow Chow are its blue-black tongue and its almost straight hind legs, which makes it walk rather stilted. Its dense furry coat is profuse and comes in two varieties, smooth coat and rough coat.

The most common colors are solid red, black, blue, cinnamon and cream, but it can also come in tan, gray, or (rarely) white. The coat sometimes has lighter or darker shades, but is never parti-colored.

The ears are small and rounded and there is a huge ruff behind the head, which gives it a lion like appearance. Its head is broad and its skull is flat. The muzzle is broad near the eyes and narrows toward a black nose without becoming pointed.

The chest is broad and deep and the kidney area is short and strong. The tail is thickly covered with hair and is carried over its back.

Health Problems: They are prone to suffer eye irritation called entropion, caused by eyelid abnormality; this can be corrected with surgery. Also prone to hip dysplasia, stomach cancer, hot spots and ear infections. 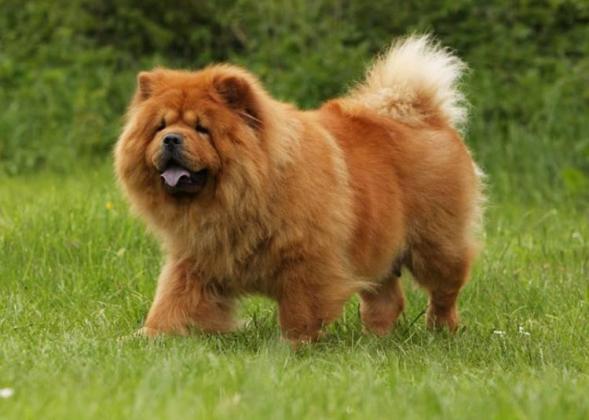 That the Chow Chow was used as food in China is well known, and it is a fact that its skin was used for clothing. The two most distinctive features of the Chow Chow are its blue-black tongue and its almost straight hind legs, which makes it walk rather stilted.