Its hard, short-haired, close-fitting coat comes in black, black & tan, blue-gray, red, fawn and white. While white markings are considered a fault in some clubs in others it is accepted.

The hair is short, thick, hard and tight to its body. Its teeth are strong and close in a scissors bite. Eyes are dark with a lively, intelligent expression. The ears are usually cropped (cut at the age of about 12 weeks).

The pup's ears have to be taped for a couple of months to make them stand up. I believe England has banned the cropping of pup ears and the docking of their tails. Lately, many breeders have left their pups natural. 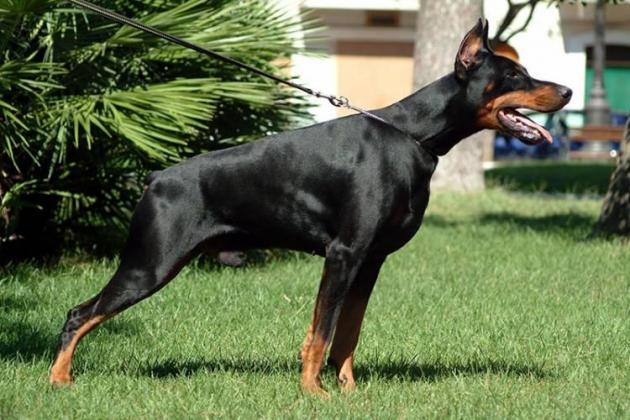 The Doberman Pinscher is an elegant, muscular and very powerful dog. It has a well proportioned chest, a short back and a lean, muscular neck. Its hard, short-haired, close-fitting coat comes in black, black & tan.