He discovered that they didnt look like their ancestors who were healthier and less extreme. David's goal was to produce a dog with the looks of the 18th century bulldog, with the temperament of today's English Bulldogs, yet healthy, without breathing problems, or all the other aliments today's English Bulldogs are prone to. This new breed can now breathe.

They will never be like hounds, able to run for miles during the hottest weather of summer, but they are three times better than the restricted modern Bulldog. Cesarean section births are not necessary.

Artificial insemination, due to male ineptness and lack of drive, has been replaced by natural ties. Lifespan is over eleven years. The Olde English Bulldogge is a muscular, medium sized dog of great strength, stability and athleticism. He is well balanced and proportioned, with no features exaggerated or standing out. He has the appearance of a dog capable of doing his original job, bull baiting. The OEB head is prominent and dramatic.

The circumference of the head is at least equal to the dogs height at the withers. The cheeks are large, well developed and display powerful jaw muscles. A slightly wrinkled forehead is acceptable. The skull is large but well-proportioned to the dogs muscular body and prominent shoulders. There is a crease from the stop to the occiput. It has a narrow skull and domed forehead. The muzzle is square, wide and deep, with definite layback.

Health Problems: May be susceptible to bloat-a painful and often fatal condition that can be brought on by too large a quantity of food consumed at one time. As with all large breeds, hip dysplasia sometimes occurs. Breeders are working hard to keep it out of the Olde English Bulldogge; therefore, no dog with bad hips is bred. 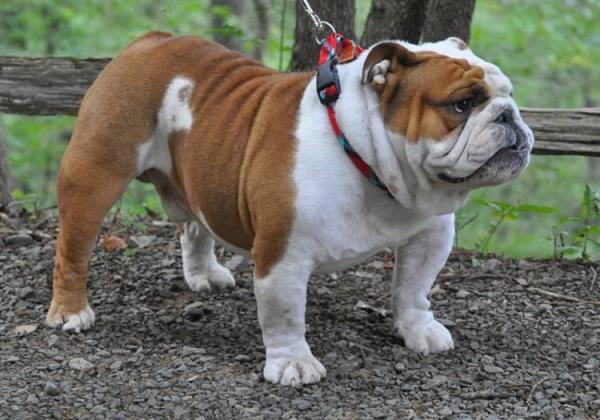 The English Bulldog is good for apartment life. They are very inactive indoors and will do okay without a yard. This breed is an indoor dog. Bulldogs do best in temperate climates as the breed can chill easily.