It is one of the many small varieties of French hounds and can be traced to the 16th century. The dog originates in France in the region of Vendeen and was used to hunt rabbit and hare.

The name translates to the following: Petit (small), Basset (low), Griffon (wire-haired), Vendeen (French region). The breed has the now-extinct white Bloodhound and the white and tan Italian hound in its blood.
Very popular in France, the Petit Basset Griffon Vendeen is rare in South Africa.

The Petit Basset Griffon Vendeen is a small, low to the ground dog, and is about 50% longer than it is tall. The topline is level. The head is in good proportion with the rest of the body.

The domed skull is oval in shape when viewed from the side. The stop is clearly defined. The black nose is large with wide nostrils. The teeth meet in a scissors or level bite.

The oval eyes are large and dark. The thin, long, oval, hair-covered ears reach almost to the tip of the nose. The tail is medium in length, set high and carried like a saber well covered with hair. Dewclaws are sometimes removed.

The long, outer coat is harsh to the touch with a thick, short undercoat. The dog has shaggy eyebrows, beard and mustache. The coat is white with any combination of lemon, orange, black, sable, tricolor or grizzle markings.

Health Problems: The PBGV is generally a healthy and carefree breed. Hereditary eye abnormalities include persistent pupillary membranes and retinal folds, neither of which commonly effect vision. There have been a few cases of glaucoma recently reported, a condition which usually results in blindness. Some juvenile animals may suffer from an aseptic meningitis characterized by lethargy, fever and neck or back pain. This syndrome, known as PBGV pain syndrome, varies in severity among affected animals and in rare instances can be fatal. Seizure disorders and epilepsy are infrequently reported within the breed, as are hip dysplasia, patellar luxation and elbow dysplasia. Hypothyroidism, food allergies and skin allergies have also been reported. 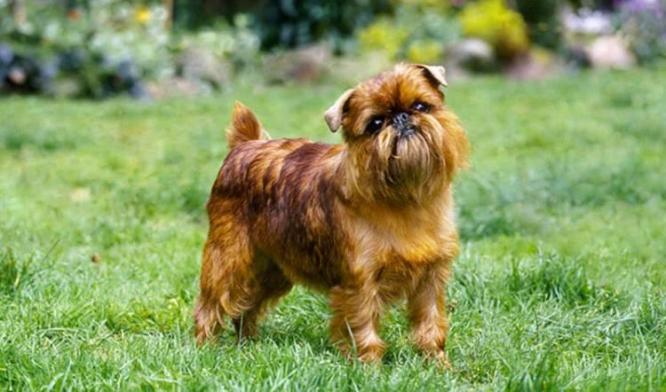 The coachmen of Brussels used Griffons for ratting and the breed has been known as the Belgian Street Urchin. The Griffon is a sturdy toy dog of square proportions with a domed head, undershot jaw, very short nose and lustrous eyes.